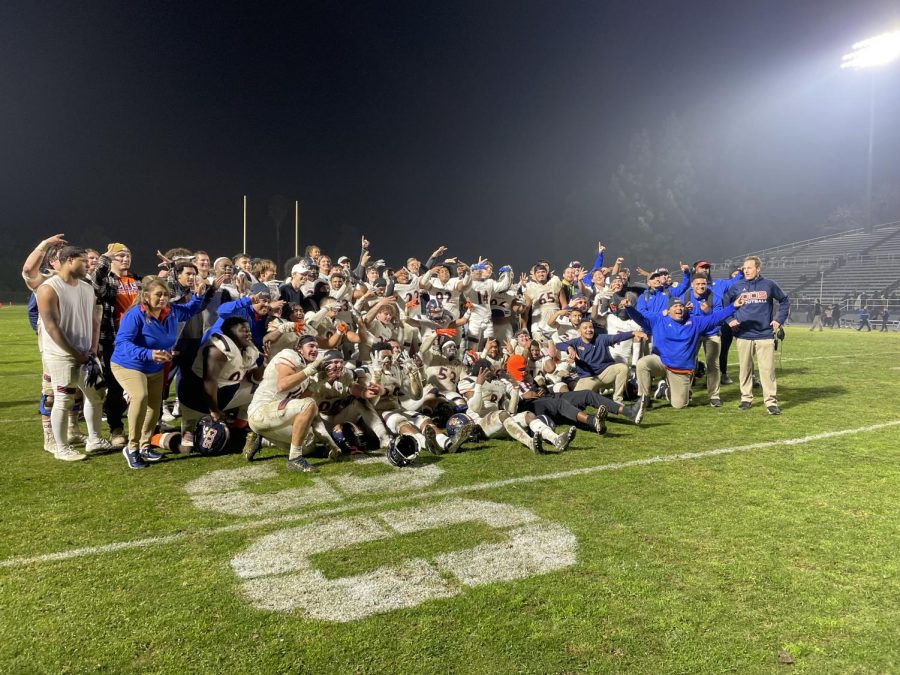 COS Giants Reign Victorious from win over Merced

On Thursday, December 2, the College of the Sequoias played in a bowl game against the Merced College Blue Devils, with the Giants coming out on top at a thrilling 40-39 finish, after the Blue Devils failed to complete a 2 point conversion in overtime, which was a gamble that Merced Head Coach Bob Casey thought he needed to take.

On that last play and in the dying moments of the game, where the men were lining up for the two-point conversion, the crowd of the half-filled stadium made it feel like they were playing in the LA Coliseum.

As the ball flew through the air, and I could see that the pass would be incomplete and COS would win the game, it felt as if time had stopped. The cold air, the wet grass, and the roaring of the Merced fans stopped for just that small instance of time, and the only thing on the mind of all the Giants fans in the stadium was just one thing: W.

In fact, it was the first W in a bowl game that COS has had since 1991, and in a year that the team had to go through so much. According to head coach Travis Burkett though, this is just the first step in the success of the program.

“I think I have to just thank the job that the coach and players did this year getting us to this point, but I really think that this is the start of the evolution of the image of this team into a first-class elite program, which has nothing to do with winning or losing.”

This bowl game though, I would have to say, is probably one of the best ways to make the image of your brand look better. Even though winning isn’t everything to help the image of your school, a breathtaking overtime victory is one way to show people that you mean business.

And from what I have seen this year, this program really does mean business. Even through the adversity that the Giants had to deal with, whether it be from injuries, covid causing players not being able to play, or having games canceled due to the bad air quality from fires. All of these things together couldn’t bring this team down and maybe bring the program closer together in the process.

The adversity even carried on into this game too, with one of the Giants players, Kelsey Demps, having to be carted off in an ambulance.

A fellow running back, Jaedyn Pineda, who excelled this game and all year really, shared his thoughts on how the injury affected his game.

“I think that we just had to work past it, we had to pray and hope that he was in God’s hands, but yeah I think it motivated me to just work harder”

Of course, an injury like that doesn’t just get shaken off in the minds of the coaches, just like how fellow players think about it. Head coach Burkett explained his thoughts about the injury on a more grand scale.
“Unfortunately, a freak injury like that is just something that we have practiced before, although it was not intentional. It is something that happens, and you just have to be prepared for it.

Pineda was just one facet of his offensive unit of course, but he along with quarterback Nathan Lamb and wide receiver Bryson Allen led his team into a punishing offense that throughout the game was able to consistently put pressure on Merced’s defense.

I would say the most surprising part of the COS offense though, was Quarterback Nathan Lamb leading the team in rushing yards. Typically, Lamb is what some would consider a passing quarterback, but as Burkett explained, you have to adapt during the game when you don’t have all that much on the front lines.

“What I think happens is when you have a guy who is as big, fast, and strong as him; we’re so thin up in the front from guys getting banged up all year so it’s hard to generate rushing yards. When we pass the ball the way we do, their rush lane is open and we took it and ran with it.”

It certainly is an improvement over this year, where Lamb and his backup QB Tate Robards would generally pass the ball and leave the rushing yards up to his running backs. In flipping the script the way that Lamb did, it generated a whole new game of rushing yards that was probably one of if not the key to winning this bowl game.

This year was filled with ups and downs for the Giants, but in finishing off on this note it will set a precedent going forward that this program is not mediocre or one to be underestimated.

Instead, this will reignite a flame that COS hasn’t burned in over 30 years. The flame in question is the burning passion for the victory that I think may have been missing in years past. It won’t burn out now though, and not anytime soon if what I saw this year is any inclination as to what is to come.