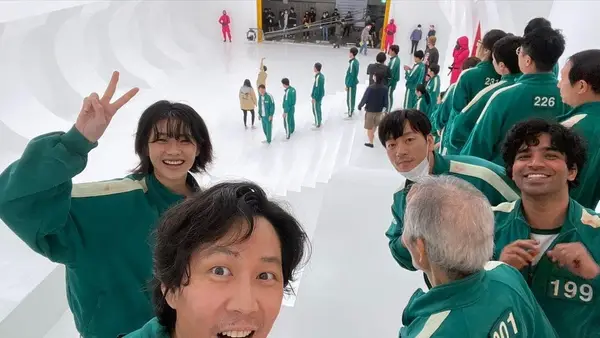 Warning: This article contains spoilers for all episodes of Netflix’s Squid Game.

Squid Game is a South Korean drama, written and directed by Hwang Dong-hyuk, which comments on the exploitation of the poor working class people of Korea. The show holds a purposeful and powerful stance against capitalism, showing the consequences and takes an in-depth exploration of the desperate measures those living under it will take.

Disconnecting the show from the underlying themes for a moment, I can confidently say that Netflix’s Squid Game kept me at the edge of my seat from the first to the last game.

Overall, the series is gripping from the beginning to the end and is perfect to binge-watch, as is Netflix’s design. The production and directing is spot-on, and that’s not even mentioning the breathtaking cinematography.

The director masterfully creates tension throughout just nine episodes; the thrilling plotline and gruesome deaths keeps viewers hooked, earning Squid Game the title of the #1 show in almost 90 different countries (via Forbes) in only three weeks of it’s time on streaming services.

Throughout the show, the viewers are shown an alternate world to ours; a story about ordinary people with ordinary lives struggling in a cruel world that takes advantage of them when they are at their lowest. They’re all but forced into a survival game, where the last person alive goes home with 45.6 billion Won (which is equal to 38 million US dollars).

A great example of this is when Kang Sae-byeok is murdered by Cho Sang-Woo, just before the final game. Despite the mercy given, considering her previous wound, the show uses this to show Sang-Woo’s deteriorating moral code and he takes advantage of her vulnerable state to get ahead.

With this choice, he rips away the life of a big sister and daughter. And, at the end of the day, he doesn’t even win the game.

He takes her life for nothing and leaves Seong Gi-hun as the only person to mourn her, since not even Sae-byeok’s own family will ever know she died.

Squid Game is an excellent show which focuses on the psychology of multiple different people who must make the choice between kill or be killed. The story is captivating from start to finish, with only one or two flaws that may dampen the impact of the story.

The ending is a little bit lackluster compared to previous episodes and cliffhangers. However, the open-endedness of it hints towards a season two, but lacks the resolution to give viewers the feeling of worthwhile payoff after all that the main character went through.

Despite its minor flaws, Squid Game is an amazing critique and portrayal of how late-stage capitalism can hurt the people under it, forcing those people to work against each other no matter what it may take.

And it’s an enjoyable watch, too.