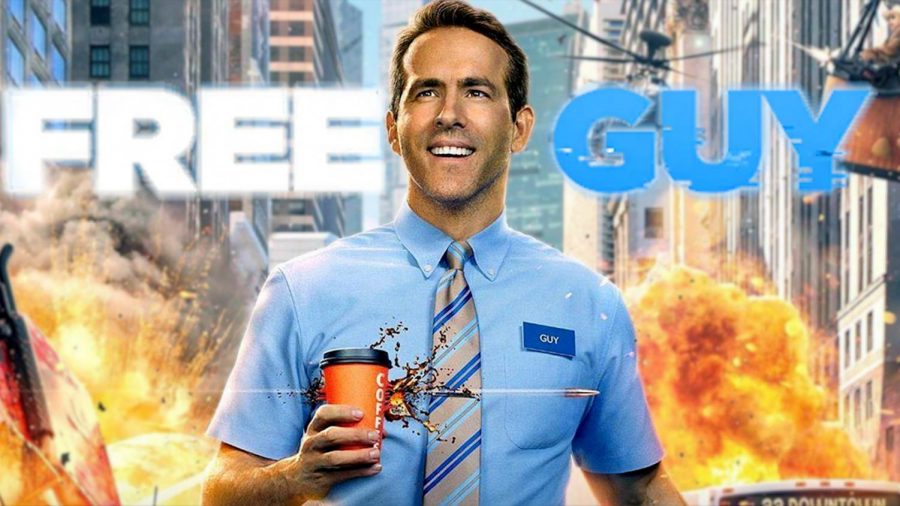 Ryan Reynolds’ new video game movie, “Free Guy”, is an amazing movie full of fun references, easter eggs, gut busting comedy, and a heart warming story, which will be especially appreciated by gamers.Guy is an NPC (Non-Playable Character) in a video game called, “Free City”, which seems to pay homage to the video game series “Grand Theft Auto”, based on the behavior of the players and the NPC’s. In the movie the NPC’s do not know that they are in a video game and know the players as “sunglasses people” as all players wear sunglasses. Guy eventually breaks free of his routine and becomes a full fledged artificial intelligence after meeting “Molotov girl”, who’s name in the real world is Millie Rusk (played by Jodie Comer), the woman who he calls “the girl of his dreams”. It is revealed the company that developed this video game, “Soonami Games” run by the main antagonist of the movie, “Antoine” (played by Taika Waititi), stole the programming for the NPC’s from an unreleased game. This game was called “Life Itself”, which was developed by Millie and her partner Walter “Keys” Mckey (played by Joe Keery), the latter of which works for “Soonami”. This movie, with its number of characters, relationships among each of them, and varied reference gives this movie perspective on what makes it both interesting and not.

Guy, our main character, lives a strange life in which the world is constantly being set on fire by the sunglasses people. His daily routine is different from that of our real life way of living, as he deals with fellow workers and neighbors on his way to work who are constantly being robbed and attacked. In the normal world, people would be terrified and likely be on the brink of war but in this world, it’s such a natural event. With Guy helping his fellow market man up, they talk normally to each other and laugh saying that it was just a normal day.

The references in this movie were amazing to experience. They are scattered all throughout the movie,and can be seen in even the beginning of the movie, where you can notice a scorpion tank from Halo, or even how the opening is reminiscent of how someone falls from the sky in a game like Fortnite. They are even packed into the end with scenes like Guy fighting Dude,with the Captain America shield, that then showed a scene with Chris Evans reacting to the sight, and then went on to show off many more easter eggs from movies and video games. For a majority of viewers, these references had to be a key point of the movie. People in theaters were losing their minds over the fight between Guy and Dude. As Guy would go from one reference to another from Cap’s Shield of the MCU to the widely known portal gun from Portal, it was an experience that large numbers of people would be familiar with and absolutely adore.

At the end of it all however, it is revealed that it was a love story. At the climax of the movie we find out Keys created Guy with the idea that he was bound to be alone until he found the right girl, who he based off of Millie, after which he would become whole. We see throughout the movie the romance between Guy and Millie develop, however it is revealed at the end of the movie that Keys based Guy off of himself. At this point we finally see Mille realize that she shares the same feelings for Keys that he has for her.

“Free Guy” is a great movie with various heartwarming moments, however there was one in particular that stuck out. In the movie, during Guy’s low point after finding out he is just a computer program, he talks to his friend Buddy (played by Lil Rel Howery) where Guy talks about how nothing matters since they aren’t real. In response to this Buddy says it doesn’t matter since the moment is real, and the love that he and his friend share for each other is real, and that is all that matters.

This sentiment can be applied to the real world, as we live in a world where people often think about how insignificant we are, as the earth is just a tiny little dot compared to the vastness of the universe. The point that this moment drove home is that what matters is the moment that we are in, and that what we do and what we feel, truly does matter.

Leading up to the release, hopes were very low for “Free Guy”, however it ended up pleasantly surprising many people. For many people it even ended up being the highlight of their year.

With incredible action, clever comedy, and touching moments, “Free Guy” has become a must watch, especially for those who hold a great appreciation and love for video games.