Meghan Markle Has Lost Her Marbles 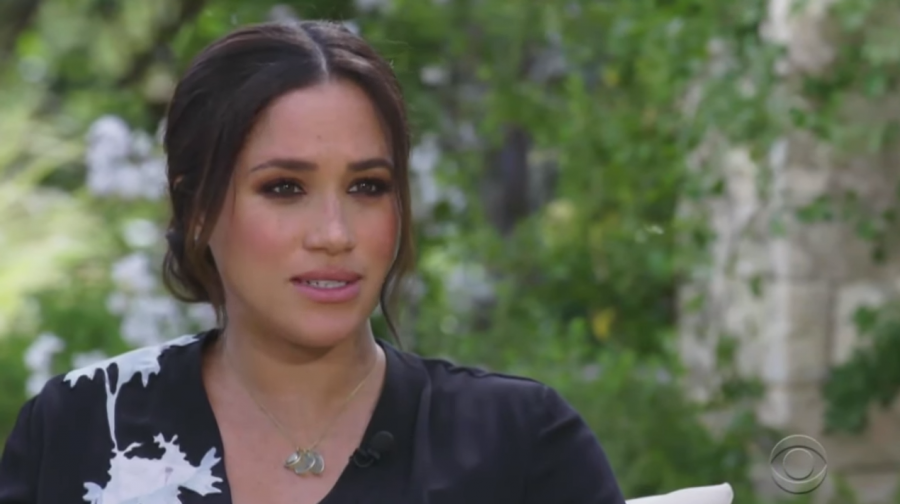 Meghan Markle in her interview with Oprah.

What do you get when you combine a C-list actress and a former royal playboy mixed with the billionaire “Queen of Media” Oprah Winfrey? You get the greatest performance and bombshell of the 21st century.

In an exclusive sit down, Meghan Markle and Prince Harry joined Oprah in an alleged no holds barred conversation about their life as royals and the tabloid scrutiny they have faced. The interview dropped many accusations including concern for the race of the couples child, and an altercation between Meghan and Kate Middleton. The revelations revealed from the Duke and Duchess of Sussex have been seen as catastrophic and “abolish the monarchy” has been trending on twitter; with many on social media calling this the decline of British royalty.

The issue is Meghan. The problem with Markle is that she’s an entitled, naive, spoiled, American. She is a privileged individual to have been in a position in her life to have been introduced to a royal; a spare tire of a prince, but a royal nonetheless. Meghan has Oprah on speed dial, yet she expects the general public to empathize with the consequences of a choice she made. She married into a British family, expecting to keep her American freedom.

After the couple stepped down from senior duties and left the UK last year; the father of Harry, Prince Charles, cut the couple off financially. That is, long after two lavish weddings, a house remodeling, and all expenses paid that came with their lifestyle. Luckily for her, Meghan Markle is now living comfortably thanks to her Hollywood elitist circle of pals and money that Diana, Princess of Wales left for Harry.

The truth is, Harry is so far down the line of succession to the throne there is no point for him to have to cater to the ways of the Monarch; it’s understandable that he and Meghan would want to step aside from the spotlight of the Commonwealth. The children of Meghan and Harry are not given a royal title because they aren’t direct heirs in the line of succession, for now. Harry’s older brother William carries the responsibility of the family throne as he is likely to be king one day; assuming the British will rid themselves of Charles, or he passes.

The Duke of Sussex is partially to blame for the mess that has been created. Had he not married an American unfamiliar with the British Monarchy and culture; the media wouldn’t have hounded Meghan like a pack of dogs. The Duchess of Sussex came in as an outsider and expected to change the foundation of a kingdom, but the princess fell from her tower. She wanted to become the Queen of Woke, but the press said nope.

Based on what was said from the interview, one could tell it was Meghans finest performance; but in no means Oscar worthy.

It’s very likely that the media here in the United States will continue to elevate the runaway royals for years to come. Stay tuned.