Halsey’s Manic: A beautiful story from a manic mind. 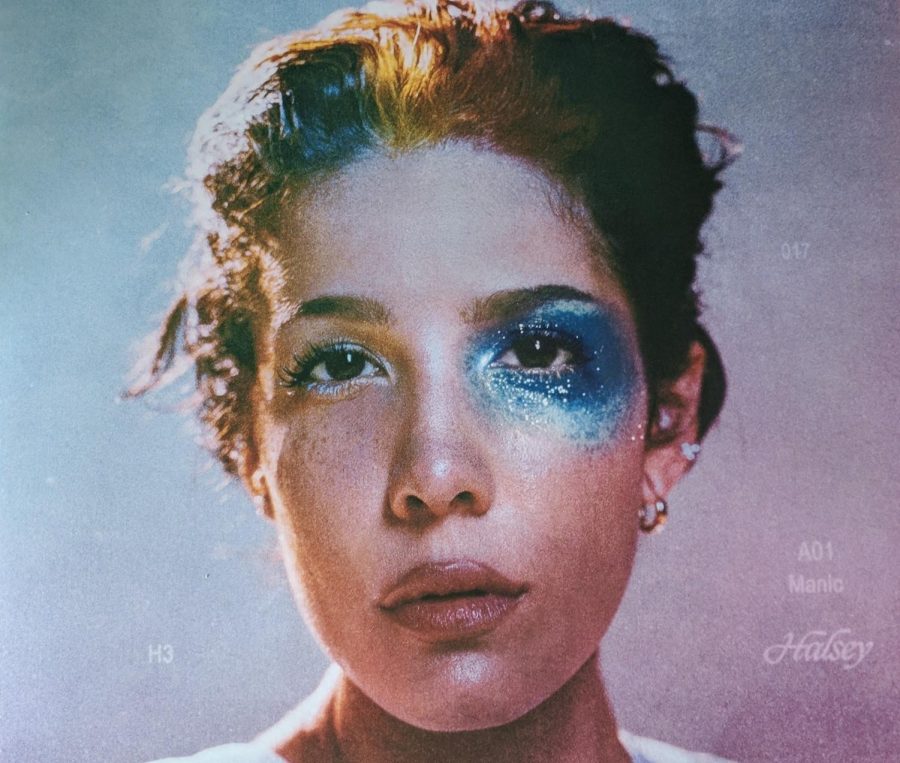 On January 17th, alternative pop princess Halsey released her highly anticipated album Manic. Fans have been waiting for the album’s release since her October 2018 single “Without Me” which achieved the number one spot on the Billboard Hot 100. The album comes after her previous works Badlands and hopeless fountain kingdom, both described by Halsey as concept albums in which she wrote from the perspective of a character dealing with exaggerated versions of her own experiences. However, with Manic Halsey stripped away the facade of a character and wrote completely as herself, even marketing the album as “Manic: an album by Ashley for Halsey,” Ashley being her birth given name. This choice to be completely authentic works in her favor as the album’s raw and revealing lyrics captivate listeners as well as resonate with fans on an emotional level. Manic is also Halsey’s most sonically coherent album with the production being different yet familiar through out and perfectly conveying the atmosphere of each emotion explored in the album’s tracks.

First on the track listing is “Ashley,” a song named after herself seemingly as an introduction to Ashley rather than Halsey and to establish that she is going to get into the nitty gritty emotional details of her life with lyrics like “I told you I’d spill my guts” and “somehow, I’m burstin’ out of myself.” This creates a seamless transition into the second track of the album “clementine.” This somber yet playful piano tune sets up Halsey’s relationship with herself as a result of her Bipolar Disorder. The track opens saying “I’d like to tell you that my sky’s not blue, it’s violent rain” then later “wish I could see what it’s like to be the blood in veins, do the insides of all my fingers still look the same?” Essentially this implies her state of mind is not all sunshine and rainbows and she often feels disassociated from herself, questioning if she is the same person as before. Similar ideas from “clementine” make a return in the second to last song “Still Learning,” in which Halsey openly admits, “I’m still learning to love myself.” These lyrics don’t come out of the blue either, they come after a journey of tracks on the album exploring her complicated state of mind like “3am” where she details calling the contacts on her phone begging others to “make me feel alright again.”

While the bulk of Manic does seem to center around Halsey’s mania related experiences from her Bipolar Disorder, Halsey does delve into other personal aspects of her life. A few of the tracks elaborate on her romantic life both negative and positive such as “Graveyard” and “Finally // beautiful stranger.” On the negative side is “Graveyard” which details a reckless partner who apparently would “lock the door… drunk at the steering wheel” yet she continued to pursue them saying, “I know when you go down all your darkest roads, I would’ve followed all the way to the graveyard.” Later in the album though, you hear “Finally // beautiful stranger” which is a positive love song with the main hook being, “beautiful stranger here you are in my arms but I think it’s finally safe for me to fall.”

Other personal details examined in Manic are Halsey’s bisexuality and struggle with reproductive issues. In “Alanis’ Interlude” featuring Alanis Morissette, the pair detail through very sexually explicit lyrics that it’s fine to love a man or woman. Then in “More,” Halsey pours her heart out about wanting to be a mother with heart wrenching lines such as “a couple years of waiting rooms, Finding God, and lose him too, Wanna scream but what’s the use?” and “they told me it’s useless, there’s no hope in store, but somehow I just want you more.” The song does leave on an optimistic note with Halsey telling her future unborn child, “when you decide it’s your time to arrive, I’ve loved you for all of my life and nothing can stop me from giving a try.”

The lyrics of Manic are extremely raw which is frankly something we don’t often get from mainstream artists, but what really propels the album to another emotional level is the cleverly crafted production. The album’s sound features a large mix of modern pop, acoustic country twang, whimsical childlike tones, and angry rock. The combination of these on paper sounds like a completely incohesive mess, but they actually mesh well together and manage to bring out the emotions of every song’s journey as well as the album’s. “Forever… (is a long time)” is a perfect example of this, the song begins with peaceful and sweet lyrics such as “so I could look into his eyes and get the colors just right” while the instrumentals behind are light, but soon become a little unsettling before becoming out right angry with Halsey exclaiming on top, “What am I thinking? What does this mean? How could somebody ever love me?” Without the dramatic increase of music and the angry almost disconnected effects you wouldn’t get the full emotional impact. This carries through the album down to it’s last track “929” which has a chill and warm sound that suggests the acceptance of one’s manic self as Halsey says “soft and slow, watch the minutes go, count out loud, so we know you don’t keep ‘em for yourself.”

The sound of Manic truly does progress as the story goes on, we begin with “clementine” after “Ashley” which are somber and felt deeply, then to “Graveyard” and “you should be sad” which are more upbeat mirroring the lyrics of acting as all is fine when the situation is quite dark, then we move into angry tracks like “killing boys” and “I HATE EVERYBODY” before settling down and getting reflective with “SUGA’s Interlude” and “Still Learning” and then you finally arrive at the beautiful optimism of “929.”

In Manic, Halsey let her guard down and gave us an inner look into her life as Ashley. Writing straight from the heart let out a beautiful collection of music that reaches new unfamiliar depths to pop music. The whimsical yet angry, but also somber and childish instrumentals complement the album’s progression from sad and angry to reflective and optimistic flawlessly and take listeners on a journey of what it’s like to be manic. Ripping your guts open and pouring them out for the public to see can’t be an easy thing, so well done Halsey and, most importantly, Ashley.